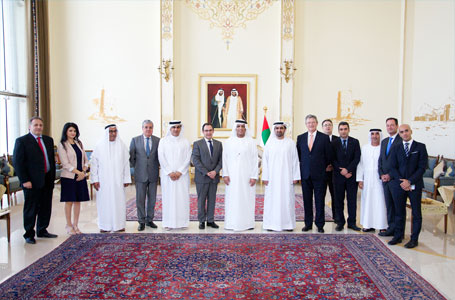 His Highness Sheikh Saud Bin Saqr Al Qasimi, Supreme Council Member and Ruler of Ras Al Khaimah, received a delegation from Manazil Group and AccorHotels on the occasion of the recent signing ceremony of four management agreements between the two groups.

His Highness welcomed the delegation and wished them success in their partnership, stressing the key role these agreements play in supporting the hospitality industry in Ras Al Khaimah.

During the meeting held at Al Dhait Palace, His Highness was briefed on the Marjan Island Resort & Spa, a 299 key, five-star resort positioned as a prominent family destination in the Emirate. The Resort is the first Manazil-owned property to be managed by AccorHotels.

Mr. Abdul Mohsen and the accompanying delegation praised the efforts made by the Government of Ras Al Khaimah to develop the infrastructure and the facilities required to attract investments, referring specifically to the significant developments the Emirate’s hospitality and tourism sector have seen over the last decade